So, you have gone to one of our favourite vendors; Kric8, Crunchy Critters (Don’t forget to use Ento10 at checkout) or Thailand Unique and you’re sat there with your insects in front of you thinking…

Well, the books below are my goto eating insect cookbooks:

Bugs for Beginners: the most complete guide to teach you how to cook edible insects:

The Insect Cookbook: Food for a Sustainable Planet 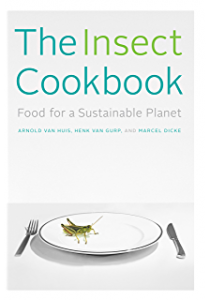 This book is an introduction to the world of edible insects, complete with over 60 recipes and photographs (black & white and colour).

It also includes a historical look at the use of edible insects in indigenous cultures and provides information on how to store and prepare them.

I am not sure about the Kindle version has been updated so I would skim over some parts of the book e.g edible species numbers (the book has 1,417 but figures now (2019) are over 1,900) and the where to buy section as I don’t think it has been updated (my copy was printed in 1998).

Professor Julieta Ramos-Elorduy has been studying the use of insects as food in the Mexican countryside at the National Autonomous University in Mexico. During their research, they discovered that over two hundred species were used which is a larger number than any other country.

The one thing Creepy Crawly Cuisine does have is over 60 recipes split into courses Starters, salads, soups, Mains, sauces and desserts. These recipes use a variety of insects ranging from Ants and Crickets to Stink bugs, Black Witches, Giant Water Bug eggs and Dragonflies.

We understand that starting to eat insects can be hard. Our podcast and videos will help keep you informed of the latest news, interviews and product reviews to show you how tasty and easy it can be..